In this part of the East Coast Australia, the bedrock is Landsborough Sandstone, which is comprised of sediments laid down in ancient Jurassic river systems which flowed across the supercontinent Gondwana.

Over the past 5-10 million years, the Caboolture River has been meandering across the surfaces of the Landsborough Sandstone, changing the land around North Harbour by erosion and deposition. As water flows down the river, higher energy is expended on outside bends, allowing the river to cut into the bands. Meanwhile, the slack water on the inside of the bend allows sediment to be deposited on bars. The overlapping remains of historical river channels and sediment bars can be seen over the wide river floodplain. The dam that North Harbour Heritage Park is centred around is a remnant of a bend in the river which became isolated from its current path. This is known as an ox-bow lake or billabong. 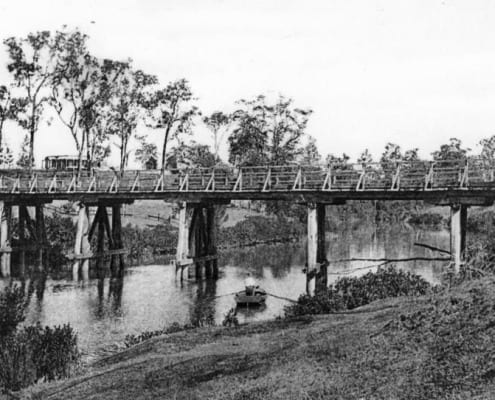 Levels up, levels down

In the past, changes in sea levels had a dramatic impact on the Caboolture River, its ecosystems, and the floodplain around North Harbour.

During the last ice age, approximately 20,000 years ago, this area would have looked very different. The sea level was 125m lower than it is today, and the coastline was a further 20km out to sea. Moreton Bay wouldn’t have existed, and there was instead a large plain containing dry eucalypt woodlands.

As the ice age ended and the climate warmed, large ice sheets melted, and the sea level began to rise. At one point in time, sea levels were 1.5m higher than they are today. This higher water level would have changed the size and course of the Caboolture River, and had the effect of bringing the coast and seawater closer. It may be that the terraced areas along the river at North Harbour were formed during this period, being cut back and then left exposed as the sea retreated to find its present tidal level.