According to Star Queen’s ship manifest, Levi Walker was a British emigrant who departed from Greenock in Scotland on 18th May 1869 and arrived in Brisbane in September that year. He found employment quickly, working as a labourer on Mr Raff’s plantation.

Sadly, tragedy struck when Levi was drowned after a seemingly innocent dip in the river. The accident happened on Sunday 10th October 1869, just six weeks after Levi arrived in Australia.

After George Raff’s death, Morayfield Plantation fell into a decade of neglect until the land was sold to a succession of dairy farmers. From 1901, the dairy farm owners re-used existed and erected many new structures including cattle dips, sheds, and fences.

During the dairy boom in Queensland, the farm here at North Harbour was the largest dairy on the North Coast. At its peak, up to 250 head of cattle were hand-milked twice a day by skilled milkmaids. In those days, horse transport was commonplace, jackeroos rounded up the cows.

Before refrigeration technology became available in the 1930s, a centrifugal separator powered by a small motor was used to extract the cream so that it could be sent to local butter factories, the closest being the Caboolture Butter Factory. The left-over milk would be fed to fatten pigs.

Dairying continued from 1951 as a share farm involving two families. The farm owners, The Williams, lived on in the old Raff homestead for a while and a Queenslander-style house was relocated to a site near the dam for the share farmer’s family, who were called The Frasers.

During the 1900s dairy boom, the Old Dairy was the largest on the north coast. At its height, over 250 head of cattle were brought into timber and tin buildings twice a day to be milked by hand. As an isolated farm with no means of refrigerated bulk transport, the cream was separated and exported to local butter factories, such as the Caboolture Butter Factory. The resulting thin milk was fed to pigs. 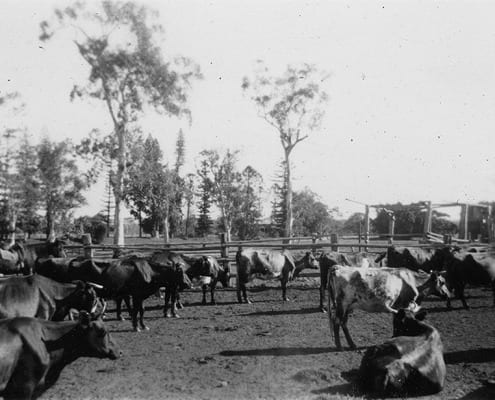 Originally North Harbour was speculatively developed as a cotton farm, in the 1860s, with a company of business partners being owners, one of which was George Raff. After this joint venture didn’t work out Raff purchased the cotton business land and developed it as a sugar cane plantation and processing works.

A Scottish settler, Raff named this Sugar development ‘Moray Fields’, to complement his Moray Bank house in New Farm, Brisbane. The “Moray” reference is in recognition of his origins in Morayshire in northeast Scotland. Raff is an extremely significant person in state history having been intimately involved in the early development of Queensland. He was a member of the first Queensland Parliament and a prominent Brisbane local businessman, operating in and out of Raff’s Wharf on the Brisbane River.

At Moray Fields Raff brought in technology to help with business activity. He introduced a loop of tramway constructed on timber foundations – a system for cut cane transport, which enabled a horse or two to haul heavy loads in from the fields more easily. Steam power was employed to drive the machinery on the property.

The plantation had to have many of the elements of a self-sufficient village with…
…stockyards, stables, sheds, carpenters shops, blacksmith’s shop, butcher’s shop, baker’s shop, stores, sawmill, and an innumerable lot of other buildings. (Brisbane Courier, ‘Mr Raff’s’, 19 October, p.2)

Then, Moray Fields was a local communication node. Local properties nearby, such as Durundur Station which was located close to modern-day Woodford, had a shed for storing supplies delivered by steamer for later collection. Cattle from Durundur provided meat for the people living at Moray Fields.

George Raff was a prominent supporter of the use of Islander peoples as labour on plantations. It remains unclear how many Islander labourers worked on the plantation, but in the late 1860s newspaper reports of the time suggest up to 70 at a time. These workers came from several islands in the South Pacific, but particularly from modern-day Vanuatu and New Caledonia.

The former plantation lands were later divided into paddocks for grazing dairy cows, though some portions continued to be cultivated. Successive owners erected new buildings and structures, such as sheds and fences. Some plantation-era buildings were re-used, including the ‘mansion’ and possibly some sheds by the Caboolture River. From 1866 to 1886 sugarcane was cultivated here to process into sugar, molasses and for the distillation of rum. By the 1870s Morayfield could be described as one of the largest sugar plantations in Queensland, with 160 acres under cultivation, growing mostly Bourbon and Black Java varieties. More than just a plantation for work, Morayfields became a small community, complete with a schoolhouse, workers’ accommodation, a bakery and horse stables.

The sugar mill was an immense building that once stood near the Dam, around 180 metres from the river. Two large boilers inside generated steam to power the mill’s equipment. The harvested cane was brought inside, laid on a platform and crushed by large rollers. Juice from the cane was collected, strained, clarified and evaporated. After the excess water had been evaporated the sugar was crystallised and separated from the molasses.

In 1869 it was reported that a parcel of Morayfield sugar carried by the steamer ‘Tadorna Radjah’ was sold at 39 pounds per ton. Some of the cane juice was used in the Morayfield distillery to make rum.

The Morayfields rum distillery was one of only two operating south of Maryborough and the Queensland Parliament once insisted on stocking Raff’s Morayfields rum. The distillery used to stand next to the sugar mill, close to the dam. There were 24 large vats inside, each of which could hold 500 gallons of liquor. Water required for the production was pumped up from the dam and held in a large tank over the distillery. At peak operation, the distillery could produce 500 litres of rum per day. In one 12-month period almost 85,000 litres was produced at Morayfields (Australian Town and Country Journal 1873).

Taking advantage of the vast resources and know-how of the British Empire, George Raff could invest in the very latest state-of-the-art sugar processing and rum distilling technology.
Perhaps the most impressive feature at Morayfields was the tramway, which ran around the plantation in an ‘eccentric ellipse’ or elongated oval shape. It connected the fields to the sugar mill and the rum distillery, and a spur line ran between the mill to the wharf.

In 1866 the tramway’s cane wagons were hauled along by horse, but by 1870 this had changed to steam power. It is believed that this is the first use of locomotive steam power on a Queensland sugar plantation. By 1873 Raff had invested over 40,000 pounds in the Morayfield venture.

End of an Era

The sale of the plantation land in 1901 resulted in the mill machinery, including processing and distillery equipment, being sold on to other sugar and rum operations to the north, at Buderim and Bundaberg. An ancient boiler discovered here, which may be one employed at Morayfield, is preserved in the Morayfields archive.

You can find out more about the Old Sugar Mill from Oral Historians by clicking on ‘Learn More’. 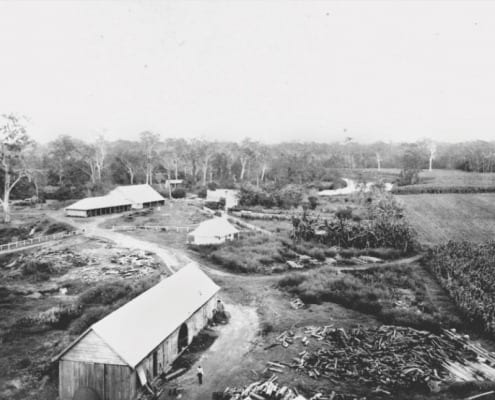 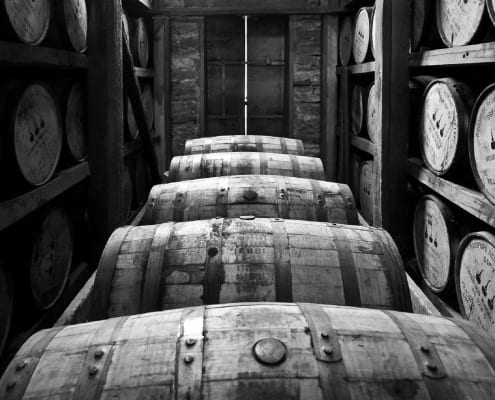 There are still many buildings from the different eras of the site’s history that have not yet been located. These include, for instance, a row of comfortable brick cottages, a manager’s residence and the ‘Kanakas outhouse’.

Whilst one description of the Islander workers’ accommodation describes it as rectangular, another says it is ‘a circular structure, close to the river bank’. This hexagonal building, captured in the background of a horse-riding image, may be a candidate for this building. Investigations using archaeology may gradually uncover the secrets of this historical place.

To delve deeper into the rich history of Heritage Park, visit morayfields.northharbour.com.au, this oral history of the site includes photos, audio clips and accounts from local oral historians. Bob Towson was interviewed for this website, which makes available stories and memories about the place which were gathered during 2013 as part of a Your Community Heritage Grant Re-Connecting with Moray Fields.

When he was interviewed, Bob hadn’t been to the site for over 70 years. He used to work here on the cattle property before the Second World War broke out in 1939. Bob, was 95 years old when he shared his memories of the place with us. 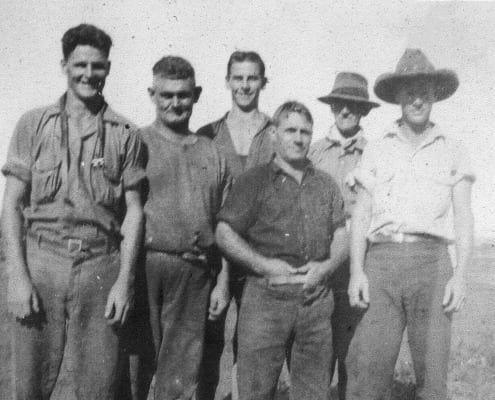 By the 1960s dairying had ceased and the land sold to A.P.M. Forests Pty Ltd. Most of the property was converted into a pine plantation. We would love to hear from anyone who worked here during those days.

In a similar way to the area of the homestead, the older brick surfaces of the Stables and the Old Dairy have been concreted over to create an easy-to-wash-down area.

Remains of the Old Dairy era are still visible from the riverside; concrete platforms and ramps for transferring milk churns.