The Mountain Bike Trail is partially open, with some of the track remaining closed for further maintenance. For a map of the closed area, click here.

These posts are the remnant of a raised corrugated water tank used for watering cattle. After the homestead became uninhabitable due to termite damage in the 1950s, it was reused as a cattle yard. In the 1970s the cattle yards were abandoned again and fell into disrepair. Invasive Camphor Laurel trees took over, growing around this post. The trees were carefully removed in 2018 to preserve the archaeological remains and were recycled to be used in wood carving. 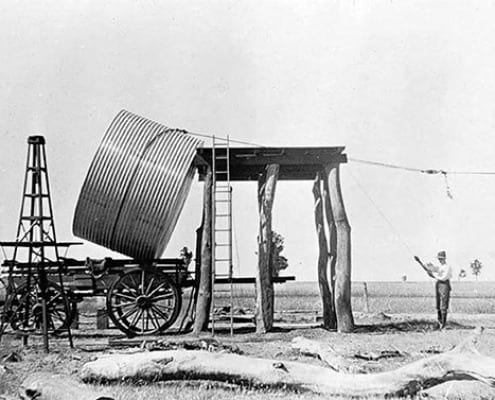 Left resting one day in the fork of a tree, this metal crank handle probably belonged to a pump motor that was used to fill the water tank. Over time it became trapped by a Camphor Laurel tree growing around it.

The stone wall beyond is the lower part of the foundation for the homestead fireplace, a support for the chimney brickwork above. The fireplace was at one end of the living room.

These brick surfaces show the position of courtyards and outbuildings around the homestead. The homestead was raised up on brick, stone, and timber foundations.

Brick courtyards, stone and rubble from the homestead were concreted over creating a hard standing for cattle. Each layer represents a different era of history. Investigating these layers can reveal how people lived and worked here.

Morayfield homestead was built by George Raff as the main residence at the plantation. Described by the Brisbane Courier newspaper as a ‘large mansion’. It was owned by the Raff family from 1867 until they sold the property in 1901.

After another 50 years as the dairy farmer’s residence, the homestead was lastly home to the Williams family, who began share-farming here in 1951. One of Cheryl Williams’ most enduring childhood memories is sitting on these steps as her mother painfully brushed knots out of her long and tangled hair. Below this stretch of path are brick foundations, which may be the remains of the distillery bond store that serviced Raff’s distillery between 1866-1885. The distilled spirit was piped directly into the bond store from the adjacent distillery, only accessible by state inspectors. Although the building surely resembles the old rum storehouse, future archaeological investigation will reveal more about its use.