The Caboolture River was important as a means of transport and communication, additionally, for the pioneering families, it offered a place of recreation and relaxation.

The Caboolture River was important as a means of transport and
communication, additionally for the pioneering families it offered a place of recreation and relaxation.

This part of the river was an important stopping off and resting place for people walking to the Bunya Festival held every
nine years by the Gubbi Gubbi people in the Bunya Mountains to the north.

From the river, Indigenous people who lived in the south were able to obtain fish, eels and other sea creatures such as crabs.

The Morayfield Plantation Homestead was described as a “large mansion” by 1867 standards (Brisbane Courier). Situated on a little rise that protects the highest house from flooding, there were also lowset outhouses around the property, including a carriage house and stables.

Geroge Raff invested heavily to create a community at Morayfield. There were many other buildings at the Plantation including labourers’ huts, stockyards, stables, sheds, a carpenter’s shop. Blacksmiths, butcher, and stores (Brisbane Courier 1872). A little schoolhouse doubled as a church on Sundays. Church services were attended by the Plantations’ South Sea Islander workers, who recited portions of scripture in their own language (Brisbane Courier 1868).

Accommodations for workers on the plantation differed according to status and role performed. For the workers that came from overseas or elsewhere in the colony, lodgings were in distinct cottages and possibly in a barracks-style arrangement. Europeans, however, lived in a “…row of comfortable brick cottages…” (Dunmore Land 1868).

In October 1867 a Brisbane Courier article about the plantation noted that “…houses for married workmen and their families…laborers’ cottages are really good and commodious structures…”.

You can learn more from the Morayfields website, which makes available stories and memories about the place which were gathered during 2013 as part of a Your Community Heritage Grant Re-Connecting with Moray Fields. Visitors should be aware that images of deceased persons may be viewed on this site. 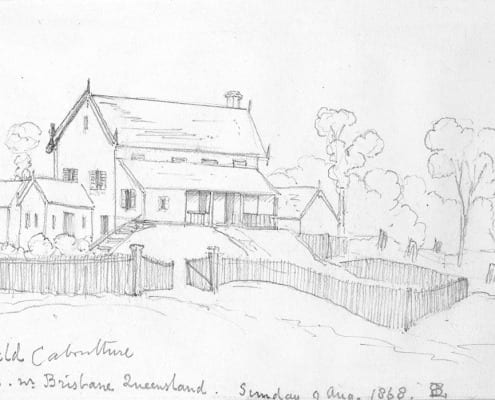