George Raff was a successful businessman and politician. Emigrating from his native Scotland, Raff arrived at Sydney in 1839 and found employment as a station manager in Gippsland. He married the daughter of a retired missionary, Harriet Bourne, in 1843. Moving to Brisbane in 1851, he got involved in the agricultural and mercantile industries, helping to establish the direct Brisbane-London wool trade.

As a politician, he campaigned for separation from New South Wales and served as a Member of the first Queensland Parliament. He was keenly interested in advancing Queensland’s interests and was a pioneer in the state’s early sugarcane industry.

In 1866 Raff bought land from the Caboolture Cotton Company and established a sugar plantation here, called “Moray Field”. A reference to Morayshire in his native Scotland to complement to his Brisbane property, which was called “Moraybank” and located in the suburb of New Farm.

The business at Morayfield Plantation between 1867 and 1887 was industrial agriculture: the extensive cultivation of sugarcane, its harvesting and processing into sugar and the distilling of rum.

George Raff lived with his family between their homes in Brisbane and Morayfields. He had 12 children to his first wife, nine of whom survived him. After his death in 1889, one of Raff’s sons continued managing the plantation for a while before selling it off into smaller lots.

George and Harriet lived a happy social and family life in New Farm until Harriet passed away in 1879. Later, in 1883 and at the age of 63, George remarried. His new wife, Eliza Jane Molle, was a 40-year-old widow with her own children. Sadly, this led to George becoming estranged from his surviving sons. Between 1863 and 1904 a remarkable 62,000 people came to Queensland from the South Sea Islands to labour on various projects.
They were known by the belittling title ‘Kanaks’ or ‘Kanakas’.Employing Kanakas was a legal activity for a short period, however, there were also illegal instances of kidnapping or deception (‘black birding’).

Recruitment for work on a sugar plantation usually involved a three-year contract; food rations, accommodation and clothes were all provided by the plantation owner.

Many Kanaks laboured in the sugarcane fields, skilfully wielding the cane knife and made a significant contribution to the expansion of the early Australian sugar industry. After the Australian Federation, changes to the State law and ‘White Australia’ policies forced most South Sea Islanders living in Queensland to be deported.

For many of these the return ‘home’ was not a good experience, some were not taken back to their home island and others faced social dislocation and exclusion having been removed from their home community for so long. 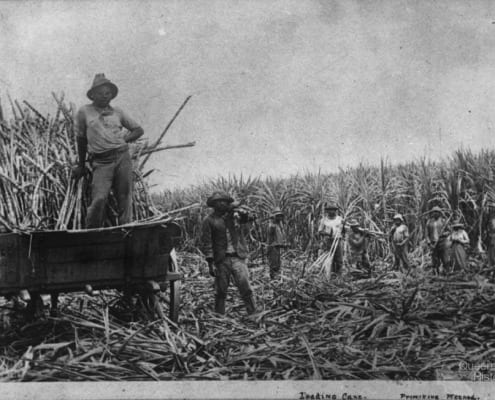 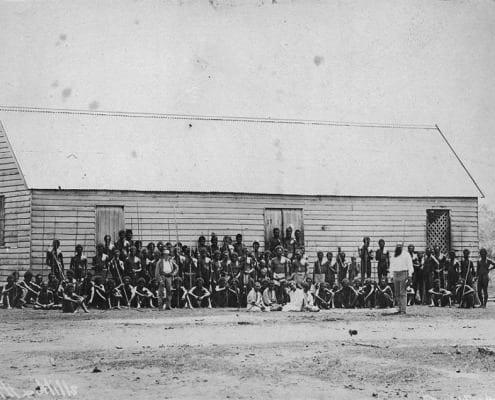 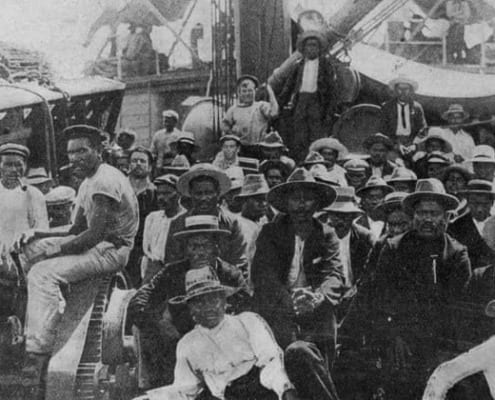 The farm operated as a share farm, which was quite common in South East Queensland. As well as increasing the labour force on the farm, it provided the opportunity to learn working practices and strategies first hand with the benefit of someone else’s experience, whilst at the same time enabling money to be saved for the purchase of another farm in the future.

First People in Australia
The first people arrived in the north of Australia at least 60,000 years ago. Over time they moved south and inhabited different places. Evidence of human activity in South East Queensland, at nearby Stradbroke Island, is 23,000 years old. When Europeans arrived, it is estimated that there were over 750 different groups in Australia, speaking over 360 different languages. These people shared many common social values and bore strong relationships with the land.

Nut Feasts
Bunya festivals were held every nine years by the Gubbi Gubbi people in the Bunya mountains to the north. They were important social events where they arranged marriages, settled disputes, sometimes with spears, exchanged songs and celebrated eating the fruits of the Bunya trees.

Senior men who were related to the head of the female head of the group, the mother’s brother, arranged the marriages. The men who were eligible were over 20 years old. Why not visit the Bunya grove at North Harbour to experience Bunyas first hand?

Relationship to Country
Indigenous people had a connection with the land and all it contained. It provided them with food and shelter, but they also felt a strong relationship with the land. For example, when someone was born, their name was associated with their place of birth and the surrounding landscape. A senior man in Gubbi Gubbi culture, Clifford Monkland, was given the name ‘Dupo’ after a rainforest bird which was present when he was born.

Living with the Carpet Snake
The Caboolture River is an important natural feature at North Harbour. Its name ‘Caboolture’ means carpet snake in the language of the Quandamooka people from nearby Stradbroke Island. In local Gubbi Gubbi language the name for carpet snake is ‘wangai’.